An exhibition featuring 22 digital works by 12 artists will light up two outdoors screens in downtown Vancouver until the end of September 2012.

The works are a selection from the City of Vancouver Public Art Program’s Digital Arts Collection. They were commissioned by the Public Art program between 2010 and 2012 under initiatives including: Olympic and Paralympic Public Art and Celebrate Vancouver 125: Platforms. The screens, located on the corner of Robson and Granville streets and at the CBC Plaza at Robson and Georgia, will display the works interspersed with advertising content.

CoreVision – A pair of permanent screens at the mounted at the northeast corner of Robson and Granville streets. These screens will feature a 20-minute compilation of all the artworks, every weekend during the summer until late September. This coincides with the City’s VIVA Vancouver programming on Granville which transforms public space usually used by  vehicles into space for citizens to congregate.  The compilations will air approximately twice an hour: Fridays from 5pm – 10: pm; Saturdays from 11am – 7pm, and Sundays from 11am to 8pm.

CBC – corner of the public plaza at 700 Hamilton Street (between Robson and Georgia)
This single screen will host a compilation of eight, 10-second works curated by Paul Wong and originally aired as part of a partnership between the City of Vancouver and  InTransit BC’s Canada Line Public Art Program.  While these pieces will run seven days a week until the end of September, they have been specifically programmed to coincide with CBC’s Musical Nooners which feature a free weekday dose of live music from noon to 1pm.

THE WORKS AND ARTISTS 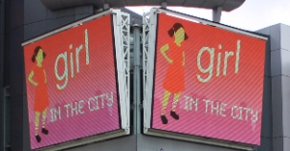 Diyan Achjad’s Girl in the City (four segments, 0:30 minutes each) – In this work, an animated avatar, “Girl”, encounters the landmarks of Vancouver and interacts with them. As she picks them up,they become a miniature collection of objects. After landing in Vancouver, Girl visits the Harbour Centre Tower, the Gastown Steam Clock, Gassy Jack’s statue and Science World.

Diyan Achjadi is an associate professor in the Faculty of Visual Art and Material Practices at Emily Carr University of Art and Design. She received a BFA from the Cooper Union School of Art (1993) and an MFA in Print Media from Concordia University (2002). Recent exhibitions include Sugar Bombs with Brendan Tang at the Mendel Art Gallery, Saskatoon, Kamloops Art Gallery and Centre MAI, Montreal, and solo exhibitions at Oboro Gallery, Montreal, Richmond Art Gallery, The Window Project, Victoria and Aberdeen Station in Richmond.

Carol Sawyer’s Wood Work (seven segments, from 0:55 to 1:49 minutes each) – Collectively, these video segments provide fragmentary glimpses into the history of the logging and lumber industries in BC, employing historic local 16mm film footage shot in the 1930s by Alfred Booth. The artist’s careful selection and processing of these source images brings this history back into the present.

Carol Sawyer attended Emily Carr College of Art and Design and received her MFA from the SFU School for the Contemporary Arts in 1998.  She produced previous public art projects as part of Memory Palace: Three artists in the Library in 2008 and an earlier piece for the Cambie Works Yard, 2004.  Her practice includes music performance and interdisciplinary collaborations as well as photography and video. 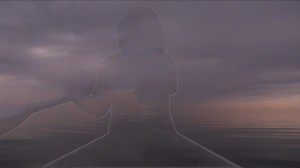 Donna Szoke’s Canoe (one segment, 2:12 minutes total) – At its centre is a digitally altered image – the silhouette of a canoeist and the moving canoe. These are seamlessly replaced with the background image of the moving water and sky, so that the canoeist and the canoe are seen as a fluid visual extension of the moving water and sky. The outline of the motion itself remains visible. The two-minute animation was created by digitally redrawing 1800 frames.

Donna Szoke received her MFA from Simon Fraser University in 2007 and is currently Assistant Professor at Marilyn I. Walker School of Fine and Performing Art, Brock University. She has produced numerous video and film works and has shown her work internationally. 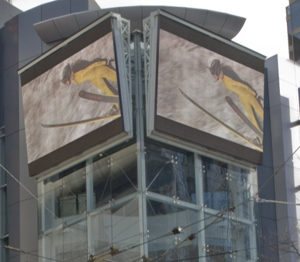 Blue by Project Rainbow (two segments, 2:00 minutes each) – This is part of an experimental film and dance documentary that features members of the Canadian Women’s Ski Jumping Team as well as settings in a rapidly changing Downtown Eastside. Both are in a state of transition, whether it be waiting for a chance to compete or witnessing the transformation of a community. Blue marks these historical, geographical and cultural changes.

Project Rainbow is a research team that explores the study of colour through movement, media, and collaboration. Previous projects include L’Human Comedy (2005), a study of the colour yellow; Variations on Green (2006); and The Ruby Glass (a study of the colour red, 2007). The team includes:

10 Seconds in Time curated by Paul Wong (eight segments, 0:10 each) — This series was originally shown on the Canada Line screens from April 2011 to March 2012.  Artists were invited to address a diversity of themes past, present and future tense by creating original works of art marking Vancouver’s 125th Anniversary. The artists whose work is included in 10- Seconds in Time are:

Public Art Program The City of Vancouver’s Public Art Program provides opportunities for citizens and visitors to enjoy unique images, objects and perspectives. These projects are part a growing number of digital media works supported by the Public Art Program. The program has facilitated over a hundred projects in the past 10 years, spanning large-scale permanent installations, design-team collaborations and artist-initiated artworks.

VancouverLive Video Screen Program The outdoor screen locations have airtime that has been made available as part of a public benefit agreement with the owners and the City of Vancouver as managed by the Cultural Service Department. The support program, known as VancouverLive, offers non-profit arts and culture organizations screen time to promote their activities and serves as an occasional digital exhibition space for public art.

One thought on “Summer Exhibition of Digital Art Reflections”