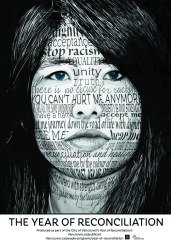 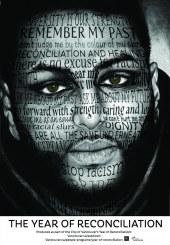 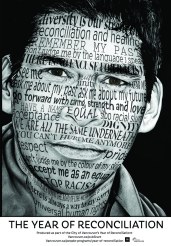 A new public art project debuts in July to honour and celebrate the City’s Year of Reconciliation. “It’s Written on Your Face” by Jeannette Sirois is a series of four photo realistic drawn portraits with words of connection towards healing of racial biases “tattooed” across the faces of each person. “The element of facial tattoos which incorporate words is meant to guide the viewer towards remembering…, as a means to convey what judging by a person’s skin colour means,” says Sirois. The posters will be in sites around the city through July. See location list below.

Additional artworks on display that debuted in March 2014 are:

Watch for upcoming artwork by Dionne Paul (Sechelt) in August.

Jeannette Sirois is a fine artist who uses traditional and digital technology. She holds a BFA from Concordia University and a Masters of Education from the University of British Columbia. Recent exhibition history includes the Surrey Art Gallery, AIRS Show at the Canadian Federation of Artists, and the Raebec Gallery (South Carolina).