The 2015 Culture Days Walking Tours were held during the September 25-27 weekend. Each tour was approximately 1 hour and will stopped at approximately 15 artworks. Tours of the artowarks along the Burrard Corridor, Yaletown-False Creek and in Chinatown. For the first time tours were offered in Mandarin and Cantonese. We asked Tour Guide Dong Su to provide us with his perspective on how it went this year.

It is the first time for the city to have a public art tour in Chinese language open to the public. Most people who joined the tour showed lots of interest in the tour. The common comment was like “I walked pass here many times but I have never noticed it is interesting until I am hearing you talk about it now.” Some mentioned to me that they have been to different kinds of English tours but could not understand much, so they were quite excited to find a Chinese tour on local culture. Some were taking notes as I spoke and asked lots of questions. Lot of them asked if there would be more tours ahead. In conclusion, the tours are meaningful to the people who came. It is a very good way to build a more engaged community. 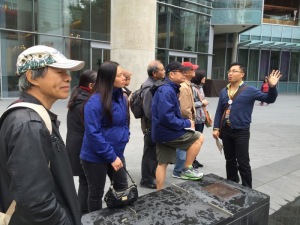 Tour the sculptures, reliefs, fountains, and other artworks that enhance our Downtown public spaces. Download our brochures and head out for an hour or two. The links below lead to PDF files under 1MB.

Dong Yue Su works on the Chinese-language version of Yishu – Journal of Contemporary Chinese Art and is assistant to Shengtian Zheng, Managing Editor of Yishu and one of the curators of the Vancouver Biennale. Dong has an MA in art history and a second MA in East Asian Studies and is a veteran Chinese journalist.