The City of Vancouver’s Public Art Program celebrates 25 years of creating extraordinary artworks for public spaces. Every two weeks during 2016 we’ll share the story of  a unique artwork created through the program.  Over 260 pieces have been commissioned since 1991 through civic initiatives, community grants or private sector rezoning requirements. These are only a few of the key pieces that have helped to define Vancouver as a unique place and a world-class city for public art!

Situated at the northeast side of the Stanley Park causeway, Rodney Graham’s Aerodynamic Forms in Space makes a playful and peculiar nod to the many seaplanes that rise and descend around this city by the sea. The work takes its title and form from a series of photographs shot in 1977 of a number of incorrectly assembled toy-glider kits. As Graham puts it, “I put the models together not with a view to having them fly correctly, but with an eye to their aesthetic value as purely abstract sculptural forms.”

With this in mind, the sculpture lends itself willingly to all kinds of art historical readings, casting a wide net of references as diverse as Russian Constructivist artist El Lissitzky’s project for the affirmation of the new (Proun) during the 1920s to the British Modernist sculptor Anthony Caro’s painted steel sculptures of the 1960s. What makes this work so striking, however, is Graham’s ability to ground these high-minded and utopian traditions in a pop-cultural vernacular related to our very own sense of time, place and space.

Approaching Aerodynamic Forms in Space, one is gradually struck by the amount of detail and expense that has gone into making this monumental-sized steel sculpture look as cheap and playful as the children’s toy it is based on. Dressed down, it sits on what looks like a model airplane base rather than the kind of plinth traditional public sculptures are mounted on. Whether it is the meticulously designed and crafted sticker looking plaque that announces its name, the plastic red of the propeller with Graham’s name presented as a logotype, or the pale blue colour of the rubber band that appears to hold it all in tension, the overall impression is one that recalls an early childhood experiment with flight. Despite all this familiarity, the work remains uncanny by the sheer fact that the scale and composition is off. Standing beneath it, it is easy to imagine oneself transformed into a tiny character in Jonathan Swift’s Gulliver’s Travels (1726).

This is the third permanent public sculpture Graham has made for Vancouver. At the University of British Columbia, we can contemplate nature by entering his Millennial Time Machine (2003), a nineteenth-century Landau carriage converted into a mobile camera obscura and housed in a modernist pavilion. At Howe Street and Pacific Boulevard, we look up to see which way the wind is blowing with an equestrian copper Weather Vane (2008) showing the artist dressed up as the philosopher Erasmus seated backwards on a horse while reading a book. In this third installment, Graham again alludes to a form of travel and nature. Considering that Graham has, throughout his career, made objects and vehicles that force us to observe the dialectical relationship between city and country, the site for this sculpture on the edge of downtown Vancouver, where skyscrapers brush up against the trees of Stanley Park, could not be more fitting. Whether you visit it by car, bicycle, rollerblades or by foot, this is a well-recommended trip.

By Patrik Andersson – curator, writer and Associate Professor of Art and Ideas at Emily Carr University. 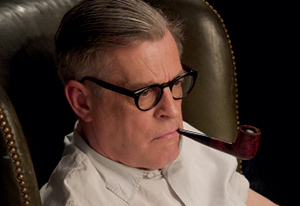 Graham was born in Abbotsford, Canada, in 1949, and lives and works in Vancouver. Since the 1970s, Graham has established himself as a rigorously intellectual artist whose work is built on the appropriation of aesthetic and philosophical systems of the past. This act of sampling has led Graham to explore, employ and expose the characteristics of a variety of mediums, including photography, film, video, music, sculpture, painting and books. As diverse as this process may seem, and despite the fact that he employs a disorienting number of references, Graham establishes a clear logic of his own that connects with his wry sense of humour. Graham is one of Canada’s most respected and represented artists with exhibitions that span the globe to include solo exhibitions at the Vancouver Art Gallery, the Whitechapel Gallery (London) and the Museum of Contemporary Art (Barcelona). In 1997, he represented Canada at the Venice Biennale and his work can be found in numerous private and public collections, including the National Gallery of Canada, the Pompidou Centre (Paris) and the Museum of Modern Art (New York).

2 thoughts on “25in25: A Public Art Retrospective – Aerodynamic Forms in Space”