That’s what it’s called: untitled; why should it be called anything, this anonymous sentinel standing tall above the pedestrians on the corner of Hastings and Bute, in an upscale office and high-rise condominium district? Of solid stone sediment, this stock-still sidewalk watchman stands on the borderlines between the business quarter, Harbour Green Park, private marinas and boat clubs, grassy patches and concrete terraced leisure areas. It’s a public sculpture stacked like a tuxedo cake with a trinket on top for the enjoyment of the public, the locals and tourists alike. This granite custodian of the corner is composed of heavy igneous rock slabs, a material the ancient Egyptians used for capstones, columns and sarcophagi; a material we’ve now learned is mildly radioactive. Admittedly, our Coal Harbour sentry appears less like a guardsman and more like a jester, dressed-up to resemble the ornate perfume flasks purchased in downtown department stores and taken away to sit on the bureau back home – overlooking the harbor perhaps – elaborate vessels for extravagant smells; surreal objects that make us feel decadent, happy and spoiled.

I want to call it a he, partly to reference historical bias in monumental sculpture – the kind that points vertically to the heavens and is associated with the phallus (the erect one indeed). But this lone jester inverts the reference with his goofy spherical hat, two golden baubles perched on top like roly-poly birdies standing in for cosmic testicles. Here, the adroitly sculpted forms suggest that these globes could drop, making a game of marbles with the local traffic. However, our comic lookout is also a convict in striped classic black and white prison wear: the golden orbs were shoplifted by a thief, later arrested and punished as in a medieval fantasy to be frozen stiff by magic for public scrutiny. Knight, joker, and jailbird, this untitled sculpture is a complex eccentric, and like many great artworks, shines best as the oddball. He’s a wizard’s tool, a divining rod, a graven idol, and ultimately an inanimate object, deposited outside to weather the seasons ambiguously in relation to the rhythms of our quotidian comings and goings. Civic sculpture, despite the outcries that often erupt when art is measured by money, tends to last for a very long time; unlike criminals, who merely receive a single judgment, a public sculpture receives the ebb and flow of our tastes and re-evaluations. 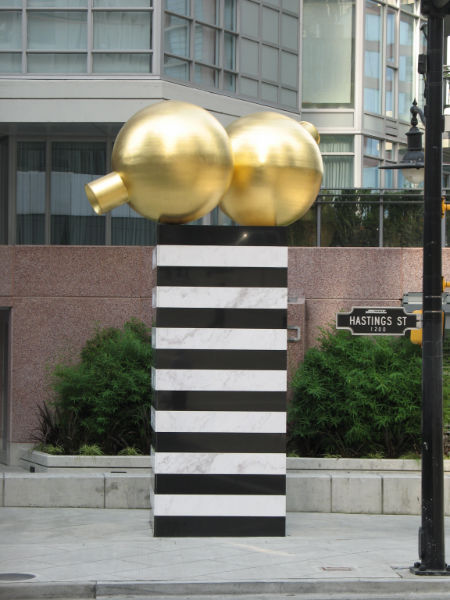 Loved or ignored, public art occupies a place in the psychic geography of our city. Untitled is a more communal and wholesome landmark than the neighbouring franchise businesses competing to occupy our sense of place-and ultimately our sense of ourselves. A skeptic of the work might be moved by children slapping the granite surface with their hands, and business folk may smile almost unknowingly during their daily commute at the glint of yellow gilt reflecting from the heavenly balls. Turn at the striped pillar with the racy hat; it’s only a few blocks from there to the harbor, the vista, and the sea.

Eli Bornowsky is an abstract painter, curator, and amateur dancer who lives in Vancouver and Brooklyn.

Al McWilliams lives and works as an artist in Vancouver, British Columbia.  He studied at the University of British Columbia (1962-1964) and the Vancouver School of Art (1964-1969). His work grew out of the austere minimalist movement of the 1960’s from which he subsequently built his own language of archetypal forms, working with classical materials such as marble, granite and gold leaf. His gallery works include sculptural drawings of paper and stone, and photo-sculptural works that incorporate gothic and renaissance figures and cathedral architecture with contemporary photographic technologies and beeswax surfaces. His work has been widely exhibited across Canada, Europe and the United States. His public artworks explore large free-standing autonomous structures and themes of the celestial. McWilliams has one other public artwork in Vancouver – an untitled black granite lotus fountain in Yaletown. With Joost Bakker and Bruce Haden, he designed the Royal Canadian Navy Monument in Ottawa, which was unveiled in 2012.