While much continues to change on the Number 003 bus route along Vancouver’s Main Street, the collage of text signage in multiple languages,  logos and graphics picturing everything from sushi and bagels to coffee cups and books remains, appealing to pedestrians at human scale. In the shop windows, new and vintage clothing adorn mannequins, tired potted plants endure dustily, botanicals line up in apothecaries, and antiques and collectibles are piled haphazardly or arranged enticingly. Amidst this variety of goods and images and words, upscale and down-market, tasteful and tacky all rub shoulders and are given space. The acceptance of allsorts is one of my neighbourhood’s many charms.

Gisele Amantea is a collector. Her relationship to collected objects is simultaneously sentimental and acutely analytic. During a visit to her home in Montreal – or in Vancouver where she lived for a number of years (I can’t recall) – I marveled at her collection of globes showing world formations old and new. They were grouped together so as to encourage a comparison of nations at different moments in time, of how scale and proportion of land to sea varied. Some were precious and beautifully constructed while others were cheap and cheerful, not made to last. Amantea’s work often confounds these arbitrary divisions of value: she elevates things like Elvis lyrics and flocked wallpaper to museum status. She encourages us to use the discerning eye of the anthropologist or cultural critic when looking at both tat and treasure.

Poodles are formal dog breeds with pedigrees: Standard, Medium, Miniature and Toy. Their clipped haircuts can have the clean modern lines of the ‘Scandinavian,’ or the ‘Continental’ (distinctive with its pompoms at the ankles and tip of the tail). But Untitled (Poodle), placed high on a pedestal at Main and 17th Avenue, is a 7-foot replica of a 4-inch porcelain figurine given to Gisele, a Russian poodle with a subdued clip and a noble, slightly contrapuntal pose. The statue is the permanent element of Memento, a cluster of artworks that included temporary works on the Number 003 Main bus – an enlarged photo of a hot pink poodle cozy that entirely wrapped the bus, its face voguing at the rear – as well as exterior and interior ‘ads’ featuring groups of poodles fashioned from synthetic yarn. On one exterior ‘ad’, poodle dolls and crocheted cozies are photographed in a blowsy crowd, peering enviously at the lone elegant Russian figurine in a parody of status anxiety. As an icon, poodles can be found at every point on the finely grained continuum of social status: from camouflaging the extra toilet roll in guest bathrooms, to enlivening the portrait paintings of aristocratic families in European museums. 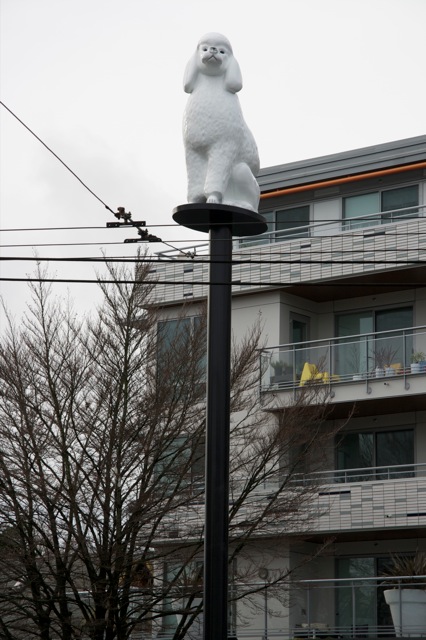 During the artworks’ initial installation, I heard no opposition to the ad-like images or the bus wrap: no one ever complains about how much visual space is taken up by advertising. But Untitled (Poodle) found itself at the centre of media controversy and neighbourhood debate. So effective is this figure at generating conversation about class, as articulated through material culture, that I overhear heated exchanges about ‘The Poodle’ in bank line-ups to this day. As an artist, I find it delightful when viewers take art so seriously, although often the debate is reduced to how much it costs or whether or not public art should exist at all. Other times, the exchange is about whether the poodle reflects the neighbourhood; whether it is a sufficiently ‘local’ character.

This last question spurred the appearance of @MainStPoodle on Twitter. Written from the poodle’s perspective, this feed comments on the weather, rants about cats and squirrels, frequently discusses his favourite treats (sausages), and engages in dialogues with other public statuary such as “Gassy Jack” and The Birds at Olympic Village. Among @MainStPoodle’s 600 followers are Irish Terriers, Standard Poodles, and even a Varied Thrush. He’s a tippler (#hairofthedog) who does shout-outs for Car Free day, posts reminders about the civic election and thanks apartment dwellers for keeping their drapes open so he can watch the Golden Globes on television. @MainStPoodle is trying hard to be a good neighbor, doing his best to fit in.

Lorna Brown is an artist and Associate Director/Curator at the Morris and Helen Belkin Art Gallery at UBC.

Gisele Amantea is a native of Calgary, Alberta, and lives in Montreal and vacations in the Gulf Islands. She taught in the Studio Arts program at Concordia University from 1995 to 2012. Her work involves a number of artistic media such as drawing and sculpture, video, wallpaper and textiles. Her interests include questions of class and gender, nostalgia and memory, and how these play out in private and public spaces. Her work is often responsive to specific sites and is generated from research into the official records found in archives, museums and libraries as well as the vernacular collections found in junk stores, popular media, and private homes. Amantea’s work has been featured in group and solo exhibitions across Canada and abroad. Her works are included in several public collections, including the Dunlop Art Gallery and the MacKenzie Art Gallery in Regina, Saskatchewan, and the Mendel Art Gallery in Saskatoon.