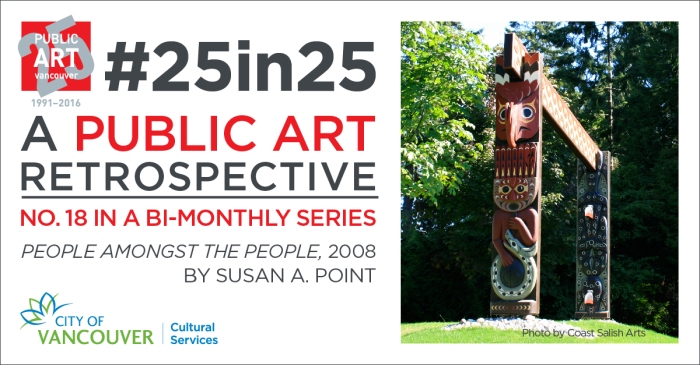 For many, “Stanley Park” is a place of refuge and relaxation, removed from the bustle of city life, yet still within easy reach. It is a place of ‘nature’ and of recreation. It is core to Vancouver’s international presence; tourists rent bikes and cycle its perimeter, admire its towering trees, and visit the totem poles at “Brockton Point” by the busload. For others, myself included, “Stanley Park” is not a park, but a place of ancient history, of spiritual power, of economic and social connections, and a place of dispossession.[1]

Musqueam artist Susan Point speaks to this way of knowing in People Amongst the People (2008). These three monumental gateways are located at the famed totem pole display in spapəy̓əq (nearby “Brockton Point”),[2] once a village inhabited by my direct ancestors.[3] “Stanley Park” was declared a British military reserve in 1863, and remade as a park in 1888. These processes, of mapping and renaming, of claiming and imposition, rendered the inhabitants ‘squatters’, facilitating their removal and ultimate eviction in 1931.[4] Simultaneous with this dispossession was the installation of monuments from other Indigenous cultures, namely totem poles from northern communities.[5] This display at “Stanley Park” is indicative of a larger trend in Northwest Coast art history, wherein Coast Salish forms were once dismissed as inferior to northern styles.[6] Thus, local communities were displaced both literally and figuratively.

It was not until 2008, with the installation of People Amongst the People, that distinct art forms of the local three local communities – the xʷməθkʷəy̓əm (Musqueam), səlil̕wətaʔɬ (Tsleil-Waututh), and Sḵwx̱wú7mesh (Squamish) – were represented in this highly visible location. The placement of Point’s work in this location is symbolic of her contribution to an increased prominence and appreciation of Coast Salish art. Point thoughtfully engages with place in several ways. The imagery on these gateways make subtle references to their surroundings.

Brockton Point Totem Poles | 25in25: A Public Art Retrospective – “People Amongst the People” (2008) by Susan Point – Photo by Alan McMillan

Weaving motifs speak not only to the historic tradition of wool weaving amongst our communities in general, but also gesture toward nearby st̕it̕əwəq̓ʷ (“Second Beach”), where women gathered diatomaceous earth, used to prepare the wool of mountain goats and woolly dogs. An image of a mask dancer alludes to its relationship with χʷay̓χʷəy̓ (nearby “Lumberman’s Arch”). Much like historic Coast Salish designs, depictions of human and non-human entities are given equal prominence, and portrayed together, conveying a reciprocal and spiritual relationship between each other. Herring and orcas are featured, two species once present in the “Burrard Inlet” ecosystem; the former critical in the sustenance of our ancestors, but frequently overlooked. Like her ancestors before her, Susan masterfully blends high-relief sculpture with low-relief engraving, as well as naturalistic representation with geometric design.

Historically, our communities did not create totem poles, producing monumental carvings in the form of house posts and welcome figures.[7] These gateways represent the internal structure of Coast Salish architecture – carved house posts found on the inside of longhouses with their supporting cross beams.[8] The exterior planks of these houses were removable, enabling both expansion of the longhouse and seasonal rounds to different locations. Families temporarily left the essential structure of a house, bringing the planks and other belongings along with them. To me, these are more than gateways, or welcoming figures; while they may function in this capacity, they also represent homes at their most basic state. Susan has noted she views People Amongst the People as “reinstating the Salish footprint upon our traditional lands.” Perhaps they are the footprint of a home, to be rebuilt and made whole – the structures are standing, waiting.

By Jordan Wilson – Wilson is an emerging curator and writer from the Musqueam First Nation.

[1] Following the work of Susan Mather (1998), I too put “Stanley Park” in quotations as a way of emphasising “that it is a particular understanding of space that has so often been taken as natural and given” (p. 3).

[2] As a Musqueam community member, I use hən̓q̓əmin̓əm̓ place names and spelling conventions to refer to these locations; members of other communities may use their own respective conventions.

[3] Others lived nearby at χʷay̓χʷəy̓ (nearby “Lumberman’s Arch”). The living descendants of these people number in the hundreds. For me, I connect to my great-great grandmother, Matilda Cole (née Pete), who lived at spapəy̓əq. For more see Mather (1998) and Barman (1997).

[4] Their houses and property were ultimately burnt to the ground (Barman p. 231). Additionally, the construction of the first roadway around “Stanley Park” included the excavation of and distribution of midden material from χʷay̓χʷəy̓ – likely including ancestral remains amongst the calcined shells (Mather p. 76-77)

[5] The first set of totem poles were installed nearby χʷay̓χʷəy̓ in 1924 as a tourist attraction, and were moved to nearby spapəy̓əq in 1960. These poles originated in Kwakwaka’wakw, Haida, Nisga’a, and Nuu-chah-nulth communities. 2009 saw the addition of a pole by Squamish carver Robert Yelton.

[6] Coast Salish is a term historically ascribed by anthropologists to a broad spectrum of communities situated in Southwest British Columbia and Northwest Washington state. For more information on this complex term, see Miller (2007). The Musqueam, Squamish and Tsleil-Waututh are part of this broader cultural group. For a discussion of Coast Salish art in relation to art of the Northwest Coast, see Suttles (2008).

Susan A. Point is an Officer in the Order of Canada, and a recipient of honorary doctorates from the University of British Columbia (2000), University of Victoria (2000), Simon Fraser University (2008), and Emily Carr University of Art and Design (2008). Since 1981, Susan has been prolific in creating work in a wide range of media, including silkscreen prints, painting, carving, jewellery, glasswork and sculpture. Throughout her career she has demonstrated steadfast commitment to the distinct art forms of her ancestors, while still refining a personal style and experimenting with non-traditional media. She has created monumental public works for UBC, the Vancouver International Airport, the City of Richmond, the City of Vancouver, and others. Susan lives and works on the Musqueam Indian Reserve.

One thought on “25in25: A Public Art Retrospective – People Amongst the People by Susan A. Point”